Zoho Flow allows for executions to be rerun based on the type of error that caused failure.

There are two types of reruns:

What is Auto Rerun?

Auto rerun provides automatic attempts to run failed executions that are caused due to Zoho Flow's internal errors or API errors from the apps that you have used in your flows. The attempts will continue in defined intervals after the initial task failure for a period of 24 hours.

What types of errors will be handled by Auto rerun?

Errors can occur due to numerous reasons, such as service failure or timeout issues. To identify and get details about the error, go to Settings > History. Navigate to the failed execution, and click the error tab. 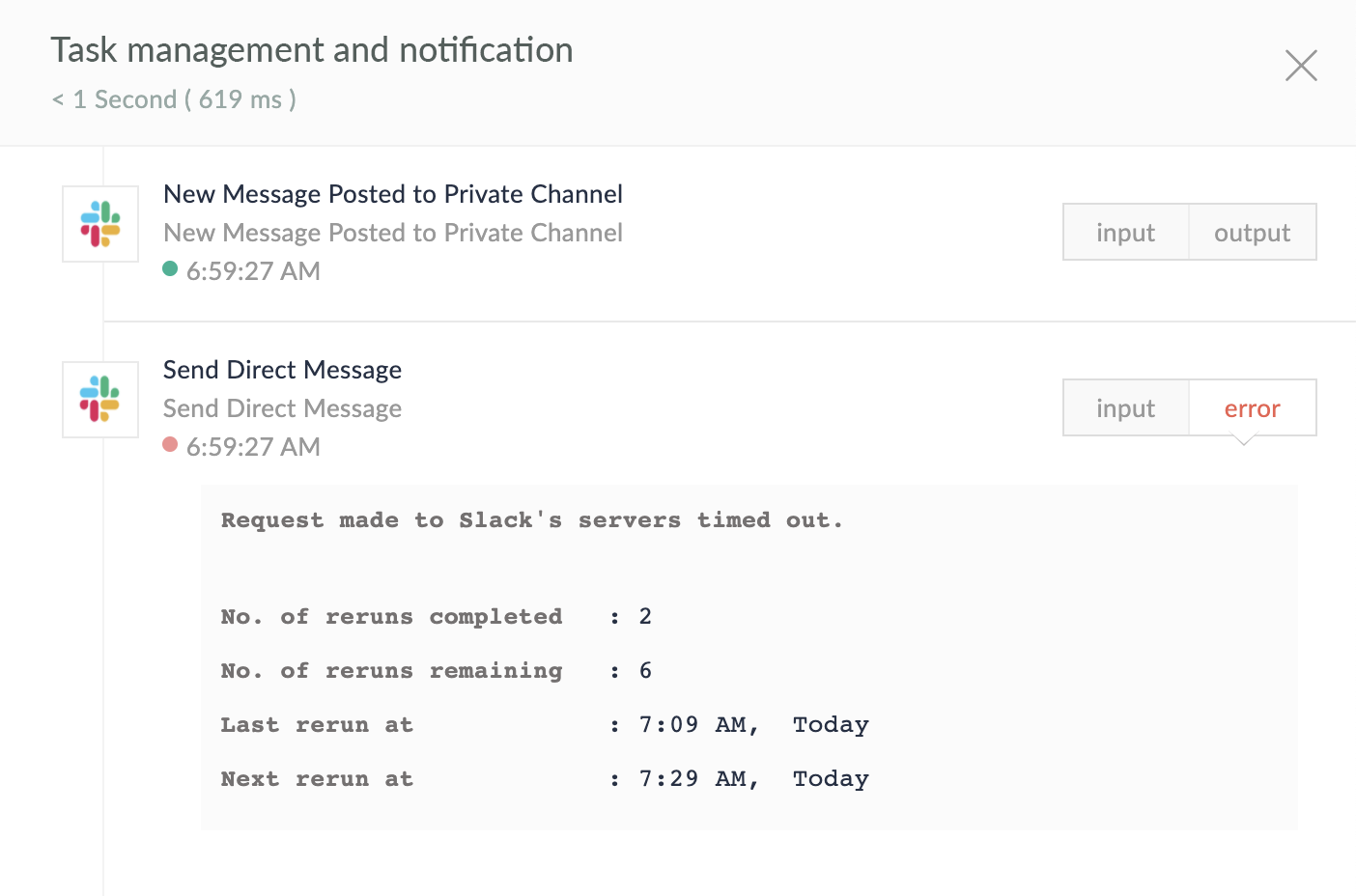 Auto rerun is performed for the following errors:

API errors from the apps you have connected:

How does it work?

When a task fails to execute, Zoho Flow will wait for five minutes before it automatically attempts a rerun. The flow will try to resume from the point (action) of the previous failure. The reruns will continue at frequent intervals if the executions keep failing.

Failed tasks will be rerun for a maximum of eight times before marking the execution as failed. The retry intervals are given below:

If the execution is successful in one of these runs, the tasks will be marked with a success message. The available task count for your account will only be deducted upon successful executions of tasks.

When will Auto rerun not work?

Auto rerun will not work in the following situations:

What is Manual Rerun?

Manual rerun lets you retry the executions that would have failed due errors arising from the following:

You can attempt to run these tasks again instantly by using the Manual rerun option.

Note: Manual rerun will not work if the flow has undergone major changes (leading to a version change).

How do I use Manual rerun?

To retry a failed execution manually:

Will the available task count in my account get reduced for every rerun?

No. Task count will be deducted only on successful execution of tasks.

When selecting multiple executions for rerun, will it all run simultaneously?

Yes, All executions will be rerun independently.

What is the maximum number of tasks that I can retry manually at a time?

You can select up to 100 tasks for rerun simultaneously.

Can I resume auto rerun if I have switched off a flow before a rerun?

Yes. Auto rerun will resume when you switch the flow on.