We will further discuss the reporting hierarchy structure in detail with a sample model of an organizational hierarchy.

Example: John Peters, the CEO of Zylker Inc., is in the administrative role and can access the entire organization's data. Under him are two Sales Managers, Amelia Burrows and Emily Ross. According to Zylker's organizational hierarchy, Sales Executives report to the Sales Managers, so each manager will have sales executives below her and will have access to their data. The VP of Sales, Mark Houston, is the non-reporting member in the organization, and his data will be accessible to John Peters.

Availability
Permission RequiredUsers with administrative permission in their profile can access this feature.

To assign reporting manager to a new user 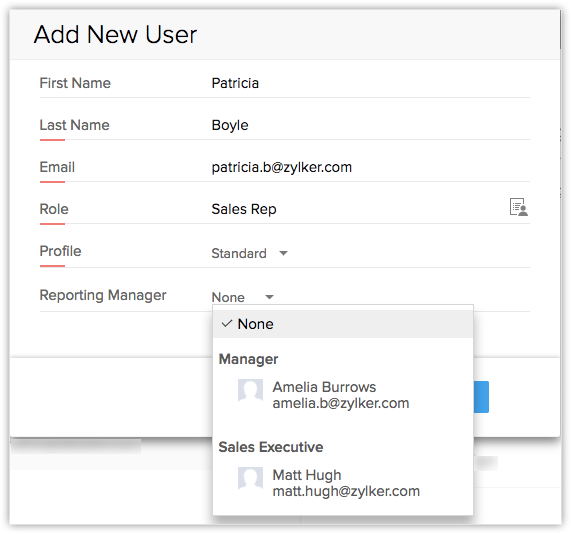 To change the reporting manager of a user 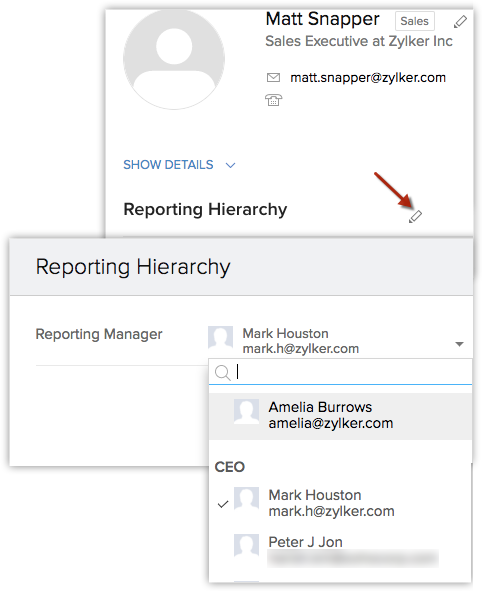 As an admin you can delete users from the CRM account. There are two conditions you should be aware of when deleting a user:

A) If the user does not have any subordinates reporting to them, you can delete the user account as it is.

B) If the user has subordinate members reporting to them, you can do either of the following: 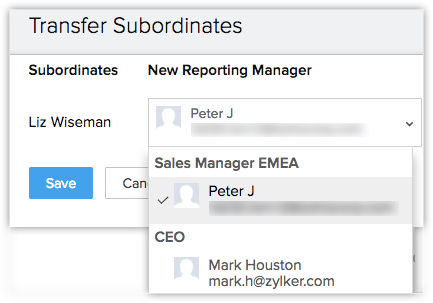 A) If a reporting manager's role is modified

When you change a reporting manager's role to different role in the hierarchy, modifications must be made in the reporting structure too. Following are some examples to elaborate such scenarios.

A person was a reporting manager for a few users but has now been demoted to a subordinate role. For instance, Amelia Burrows was a Sales Manager (EMEA) and Sales Executives Mark Snap and Liz Wiseman reported to her. If Amelia has not performed well and has been demoted, then Mark and Liz must be assigned a new reporting manager.

To change roles and reporting manager 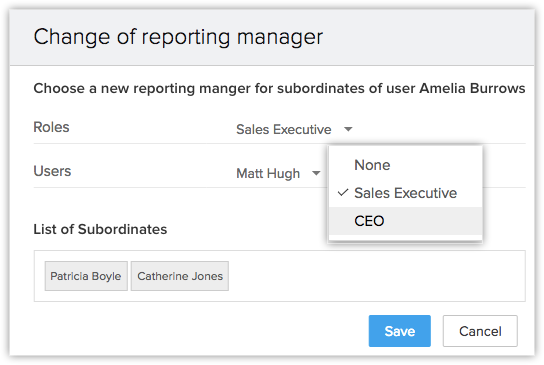 B) If a role is modified

When you add or remove a role from your organization's hierarchy, the reporting structure must be altered.For instance, as we have seen, our sample company follows this basic hierarchy: CEO > Vice President of Sales > Sales Manager > Sales Executive. The following examples show some scenarios where changes to a role itself require that other changes be made as well

If users are transferred to another branch in the organization, they must be assigned a reporting manager from the new hierarchy branch. For example, Fiona Williams is a product executive for EMEA and is now transferred to the sales executive role.

To modify a role 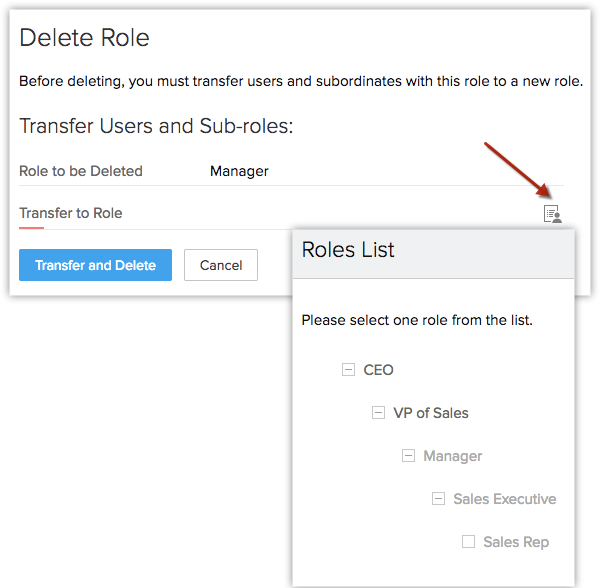 CRM records can be viewed and accessed only by the record owners and the superior's who are in the same branch. Reporting Hierarchy allows you to choose members from other branch with whom you want to share the data. You can set the permission rights as read/write or read-only. 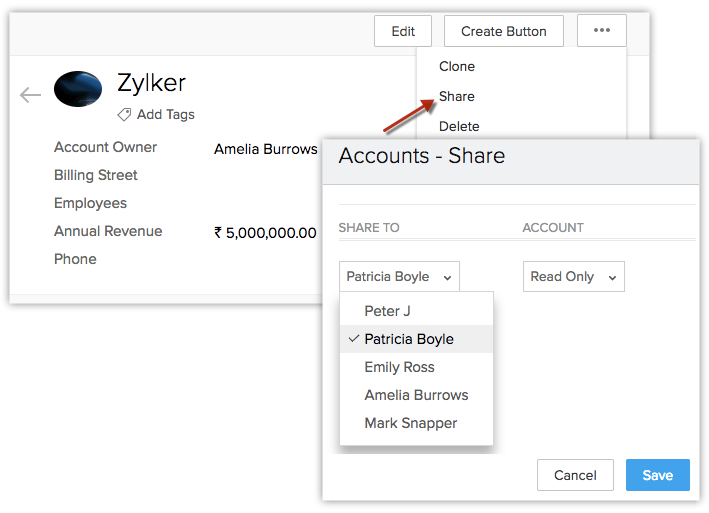 In business, there are innumerable occasions where a superior's approval is required before finalizing an activity. Zoho CRM has enabled you to redirect such activities to a record owner's superior. In the reporting hierarchy, you can choose a record owner's reporting manager to perform these actions. Listed below are few instances where a reporting hierarchy brings significant changes:

In business, there may be many instances where a task needs a superior's approval before proceeding. For example, a sales rep offering a product discount or deciding to initiate a campaign may require approval from the sales manager. A reporting hierarchy allows you to assign the user's reporting manager as the approver for these kinds of activities.

To select reporting manager as approver

Zoho CRM lets you create sets of actions that help you automate sales and marketing activities. You can associate these actions with workflow rules, blueprints, and approval processes. One of the actions that can be directly associated with the reporting hierarchy is sending alerts. You can associate an alert with a workflow rule, so that the selected email is automatically sent to the recipients when the rule is triggered. In the reporting hierarchy, you can choose a record owner's reporting manager as one of the email recipients.

To send alerts to a reporting manager

A blueprint in Zoho CRM creates an online replica of your business process that helps you keep track of your business at different stages, which are called states.A link between two states, called a transition, is displayed in a record's detail page, with a list of actions necessary to complete the transition. Using a reporting hierarchy, you can designate a record owner's reporting manager to execute the actions and complete the transition process.